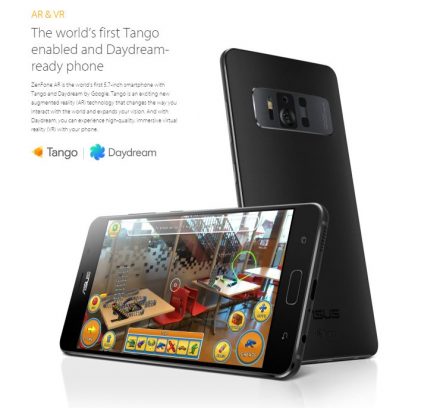 Asus, on the sidelines of CES 2017 has launched a new smartphone in ZenFone series, the Zenfone AR. The gadget features an  8GB RAM, along with support for Google’s Tango, AR programme & DayDream virtual reality software. The smartphone features a 5.7 inch Super AMOLED QHD display screen and a fingerprint scanner on the home screen button.

Asus ZenFone AR is powered by high-end Qualcomm Snapdragon 821 processor that is customised for Tango.  The smartphone will have exclusive Asus ZenUI VR 360 degree app support on PhotoCollage, Gallery, & ZenCircle apps.  The smartphone features a 23MP Sony IMX318 module lens with TriTech+ autofocus system, dual-PDAF, second-gen Laser Focus, & continuous focus.  In the front, the device comes with an 8MP front-facing camera. Running on Android 7.0 Nougat OS Asus ZenFone AR is expected to be in the market in the Q2 of 2017. The complete specifications are not yet revealed.

In the same event, the company launched  ZenFone 3 Zoom smartphone featuring a 5000mAh battery. ZenFone 3 Zoom weighs 170 grams and has dimensions 7.9mm. This is said to be the “thinnest and lightest” smartphone featuring a 5000mAh battery. The ZenFone 3 Zoom sports a 5.5-inch full-HD (1080×1920 pixels) AMOLED display with Corning Gorilla Glass 5 cover on top. The gadget is powered by a 4GB RAM and 128GB internal storage. It is powered by a Qualcomm Snapdragon 625 processor. Asus ZenFone 3 Zoom sports a dual rear camera setup, with a rear camera of  12MP & a front selfie camera of 12MP. This device is expected to available in February 2017.