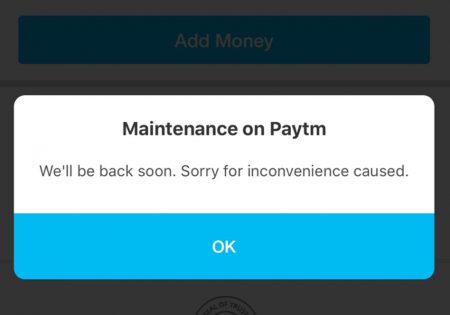 As Indian government is aggressively campaigning for the cashless economy, post the largest demonetisation announcement, Paytm, India’s leading mobile wallet has removed its app from the iOS App Store. As per a blog post by Paytm, the team detected a bug in its app on iOS platform. The bug is the prime reason why people were having problems while doing transactions.

Of late, Paytm is witnessing regular service outages due to the high number of users. The company said that it is updatings its iOS app. It added the problem was only for some of the iOS app users while it was working fine for other platforms. [We have been using the Android app and the website and didn’t face any issues.]

In the blog post, the company said: “Today we found a bug in our iOS App where certain app users were not able to pay thereby hanging their app. Soon the system logged them out preventing them from further accessing their account. We are sending an app update to Apple immediately and requesting them to approve the same as soon as possible. Once live, we request our users to update their iOS app.”

In another news PayPal, the global payments platform has opposed the trademark application of Paytm. PayPal accused the Paytm of adopting deceptively and confusingly similar logo to PayPal which is likely to cause confusion and deception among the consumers. The full copy of Trade Mark opposition can be found here.