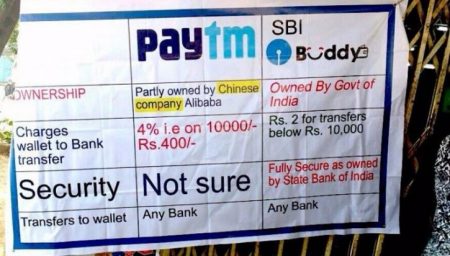 SBI which is aggressively promoting its payments app SBI buddy has now disabled money transfer from SBI accounts to PayTM. The move was confirmed from a tweet by SBI. This is not the first time SBI tried to play an unfair game with Paytm to promote its SBI buddy app. Earlier the founder of PayTm posted a banner of SBI which said PayTm is a Chinese company. Post demonetisation PayTm has seen a hike in overall transactions and was down several times in December.

ICICI India’s leading private sector bank on Tuesday introduced Eazypay, a mobile app for merchants to receive payments. With this ICICI is all set to compete with digital payment providers PayTm and freecharge.

“Any merchant who has a current account with ICICI Bank can use the app to receive payments in store, or during home delivery of goods, through the Unified Payments Interface (UPI), credit or debit card, internet banking, and the banks digital wallet Pockets,” the bank said in a statement.

By simply entering the amount, selecting the preferred mode of payment by the buyer (Debit card, UPI, etc.) an invoice can be generated. For payment using UPI, the buyer can pay either by scanning a QR code displayed on the seller’s phone or directly through their VPA. The money collected through this app will directly go to the current account of the merchants. The app is currently available only on Andriod play store.