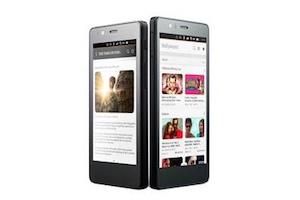 The Aquaris E4.5 Ubuntu Edition comes with a 5 megapixel front camera and an 8-megapixel rear camera with features like dual flash, auto focus. It comprises of a MediaTek quad-core Cortex A7 processor along with 1 GB of RAM. The phone has an internal storage memory of 8 GB. The phone is powered by a 2150mAh battery.

he Aquaris E5 Ubuntu Edition features a 5-inch display with a screen resolution of 720 x 1280 pixels. It sports a 5 megapixel front camera and a 13 megapixel rear camera along with BSI sensors. Both devices will be available in black colour and will support dual SIM functionality. Powered by a 1.3GHz MediaTek quad core Cortex A7 processor and 1GB RAM, the phone features 16GB storage with a microSD card slot that supports expandable storage of up to 32GB. The phone is powered by a 2500mAh battery

The Aquaris E4.5 was launched in Europe in last February while the Aquaris E5 was introduced in June. The Smartphones run Ubuntu mobile OS and come with Scopes available on the European Editions along with new ones created especially for Indian users. Scopes feature individual widget-like prompt start screens that provide fast  and easy access to content. Both devices will be available in black colour variants.  In terms of connectivity, both  Smartphone supports 2G, 3G, Wi-Fi, Bluetooth 4.0 and GPS