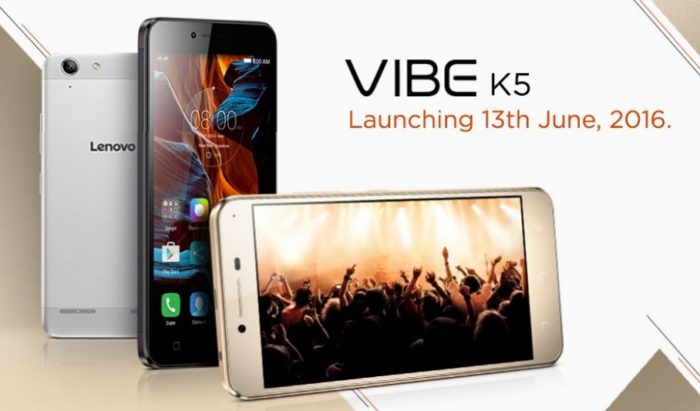 Banking on the success of Vibe K4 Note and Vibe K5 Plus, Lenovo is all set to launch Vibe K5 in India on June 13. Lenovo confirmed the launch date of the Vibe K5 on by a post on social networking website Twitter on Friday. The Twitter post described K5 as the successor of A6000 successor and revealed the handset in three colour variants gold, silver and dark grey. The gadget was for the first time showcased at Mobile World Congress in February. Earlier in May, Vibe K4 Note launched in January reached 5,00,000 sales figure.

The smartphone sports a 5.00-inch touchscreen display with a resolution of 720 pixels by 1280 pixels and is powered by 1.2GHz octa-core Qualcomm Snapdragon 415 processor and with a 2GB of RAM. On the storage front, the phone comes with 16GB of internal storage that is expandable up to 32GB using a microSD card.

Lenovo Vibe K5 features a 13-megapixel primary camera on the rear along with a 5-megapixel front camera. The device is powered by a 2750mAh removable battery and runs on an Android 5.1 OS. The device weighs 150.00 grams and has dimensions 142.00 x 71.00 x 8.20mm(height x width x thickness). Vibe K5 supports dual SIM (GSM and GSM) connectivity feature with two Micro-SIM slots. Other connectivity options include Wi-Fi, Bluetooth, GPS with A-GPS, FM, USB on the go, 3G, 4G (with support for Band 40 used by some LTE networks in India). Sensors on the phone include an Ambient Light sensor, Proximity sensor, Accelerometer, and Gyroscope.