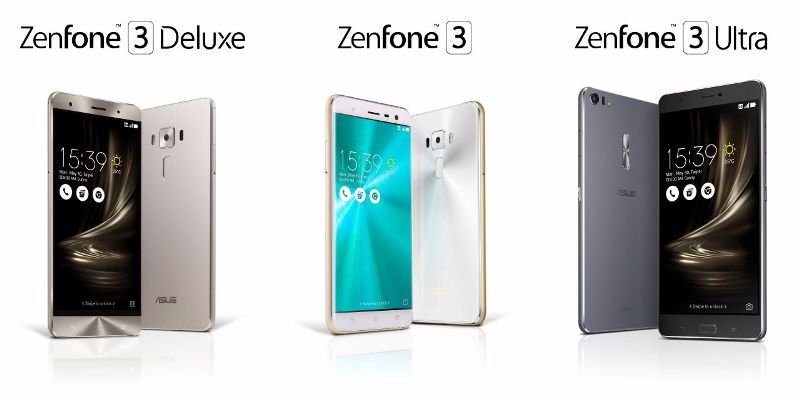 Asus, as a part of its Zenvolution campaign, uneviled three variants of  Zenfone 3 smartphone series at Humble House auditorium, Taipei. The event took place on the sidelines of Asia’s premier technology fair, Computex 2016, in Taipei on May 30. Only a few days back Asus launched refreshed Zenfone Max in India and announced Sonakshi Sinha as its Indian brand ambassador.

The Asus ZenFone 3 priced at $249 sports a 5.5-inch TFT LED backlight display with a 1080p resolution. Powered by Qualcomm Snapdragon 625 processor along with 3GB/4GB of RAM and Adreno 506 GPU. Camera options include a rear camera with 16-megapixel powered by Sony’s 16-megapixel IMX298 sensor and an Optical image stabilization, F/2.0 aperture, Laser autofocus, and on the front is an 8-megapixel camera with a F/2.0 aperture and an 88-degree wide angle lens. As per reports the rear camera can capture 64MP super resolution pictures and 4K videos with 0.03 seconds TriTech autofocus technology, 4-axis OIS and 3-axis EIS is also included. The ZenFone 3 has a 3000mAh battery, it can be noted that Zenfone Max is powered by a battery of 5000mAh.  On the exterior the gadget has a glass on both the sides with a 2.5D glass on the top of both, front and back.

Powered by Qualcomm Snapdragon 820 and Adreno 530 GPU the ZenFone 2 Deluxe comes with a massive 6GB of RAM and Universal Flash Storage option. The gadget comes with a bit larger screen than on the ZenFone 3, i.e, a 5.7-inch AMOLED display. On camera options it has a 23-megapixel rear camera with 0.03 seconds TriTech autofocus technology, 4-axis OIS and PixelMaster 3.0, 3-axis EIS. The device comes with a Quick Charge 3.0 technology for fast charging and a USB Type-C connectivity . It is first smartphone to use Sony’s 23-megapixel IMX318 sensor and supports 4K video recording. The super resolution mode has been enhanced up to 92 megapixels (Whoh 🙂 ). The Gadget is priced at $499

With a larger display of 6.8-inch Full HD display, an octa-core Qualcomm Snpapdragon 652 processor, 4GB of RAM. It comes with an invisible antenna design, Dual stereo speakers, Hi-res audio, and DTS Headphone:X. The large phablet is priced at $479 for 4GB RAM / 64GB storage. a 4600 mAh battery and USB Type-C with support for Quick Charge 3.0 technology. The battery has a massive capacity of 4600 mAh battery and can charge other devices as well. With USB Type-C slot, the gadget comes with Quick Charge 3.0 technology. Connectivity options like WiFi 802.11ac, Bluetooth 4.2, Cat 6 LTE, and USB 3.0 Type-C connector. The Zenfone 3 Deluxe will be available in three colour variants i.e, Gold, Silver, and Grey and is priced at $479.

Asus Zenbook 3 an 11.9-millimeter device was also uneviled at the event. Zenbook 3 cliams to be thinner and lighter than Apple’s MacBook. Coming in three variants at a price tag of $999, $1,499 and $1,999, the ZenBook 3 features the company’s highest ever screen-to-body ratio of any of its laptops at 82 percent along with a screen is 12.5 inches, and is coated in gorilla glass.

Another gadget named Zenbo, a friendly home robot designed to provide assistance, entertainment, and companionship to families is also howcased at Computex 2016